The Triadic Ballet and Rondo 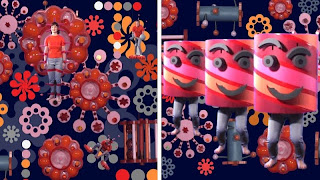 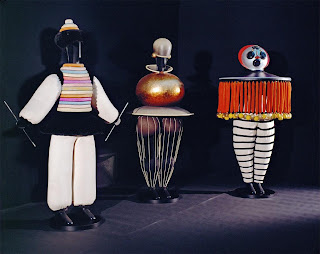 The web between fashion, costume, dance and experimental performance is complex. We viewed an excerpt from Oskar Schlemmer's Triadic Ballet today, which - despite its origins in 1920s Germany, remains influential and inspiring to contemporary artists and designers. In the words of the artists who created "Rondo", a multi media performance and installation in 2005:

Rondo (2005)
Embracing curator Laura Domencic’s theme of “play” we created Rondo specifically for the 2005 Pittsburgh Biennial. Inspired both by Oskar Schlemmer’s Triadic Ballet and by the kaleidoscopic dance routines of Busby Berkeley, Rondo is pure spectacle. We combined the live action improvisatory movements of Mark and Christine Cato, outfitted in absurd geometric costumes, with digitally animated forms and physically constructed models. The resulting assemblage presents a layered machine or system in which figures, constructed forms, and digital abstractions intermingle in a dynamic and colorful matrix. Presented in an oversized geometric kiosk, the video can be viewed from any starting point and defies any narrative expectations. Paired with a large projection of a virtual mechanical system the installation suggests the ridiculous workings of a pointless, but visually pleasing machine.
Posted by Experimental Fashion at 10:03 AM