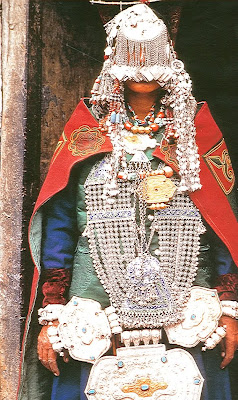 Traditional Northern Indian Headdress, possibly Nepal
As we consider the various influences and sources of inspiration in our work, and reconsider Peter Wollen's closing words in "Art and Fashion: Friends or Enemies", I thought I would share the following excerpt from Anne West's essay "Weaving Out Loud":
The visual symbolic language - the condensation of widely shared and deeply felt information and experience into primal nodes of truth - is at once universal and particular, dynamic and radical. For a visual symbol to communicate subtle, hidden life and function with spiritual grandeur and fecundity, it must be allowed to pervade all levels of reality, from the mental layer through the mythic. Lamentably, in contemporary Western culture's tendency toward an ever increasing, devitalizing fragmentation, few are in touch with the resonant, unifying power of shared, symbolic language. Vital symbols, once a treasure for constructing an understanding ofour humanness and a means to further spiritual life, have been eroded by what communication critic Neil Postman calls "the great symbol drain" by technology: the trivialization of the symbolic language by entertainment enterprises whose sole interest in the visual is to further commerce. Public myths and images circulated daily in the media make difficult the maintenance of a holistic perception of the world and the ability to establish relative priorities from the multitude of sensations that engulf us. Today we consume images, yet we do not know how to access their deeper sources and meaning. Cosmic truths, with a grammar and syntax of a shared symbolic language, have been ignored or overwhelmed by technology and progress. The opportunity for grasping the substance of our lives and a sense of rootedness and continuity has faded as the pace of activity has increased." (p.62)

Christian Dior runway look circa 2001
There are myriad examples of the situation described above in the mass media, and in the world of fashion where cultural signifiers are often appropriated willy-nilly for visual effect.
However, artists/cultural workers, from the Dada cabarets to the warehouse performances of Baltimore, have worked along a different vein. They search through the chaotic pile of cultural material and the rubble of blown-up 'truths', endeavoring to understand, make sense of, reconstruct or recontextualize - in a meaningful way - the myths, customs, rituals and stories we inherit from our many ancestors.
Posted by Valeska at 8:47 AM