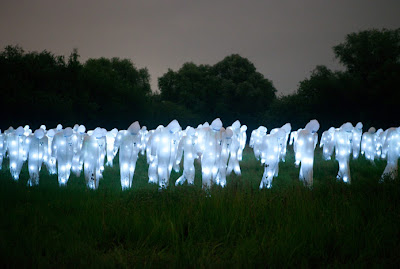 This installation called "Radioactive Control" caught my eye recently. A collective called "Luzinterruptus" based out of Spain, created the piece for the Dockville Music & Art Festival in de Hamburg. They said they were calling attention to the paranoia and concern after Japan's earthquake as well as Germany being the first developed country with intentions to abandon the use of Nuclear energy by 2022.

Beside referring to an interesting debate, I think the piece is lovely. They use simple but effective materials to command a presence and the use of garment in this one is very powerful. 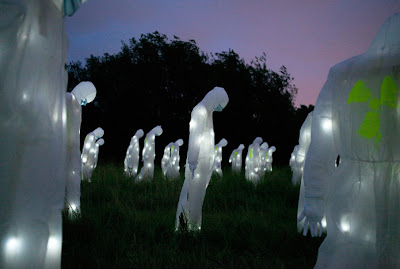 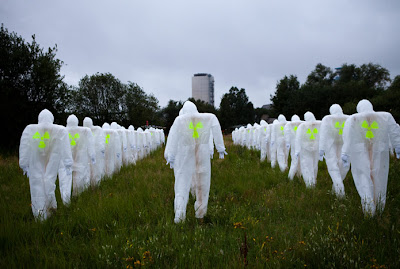 Luzinterruptus is an anonymous artistic group, who carries out urban interventions in public spaces. We use light as a raw material and the dark as our canvas.

The two members of the team come from different disciplines: art and photography and have wanted to apply our creativity in a common action, to leave lights throughout the city so that other people put them out.

We began to act on the streets of Madrid at the end of 2008 with had the simple idea of focusing people´s attention by using light on problems that we found in the city and that seem to go unnoticed to the authorities and citizens.

But everything that we do does not have a subversive aim. Sometimes we simply want to embellish, or to highlight anonymous places or corners that seem special or objects to which we think extraordinary artistic value, although they have been left on the streets for unknown seasons, with artistic intention, by anonymous people....

Posted by Experimental Fashion at 6:33 AM