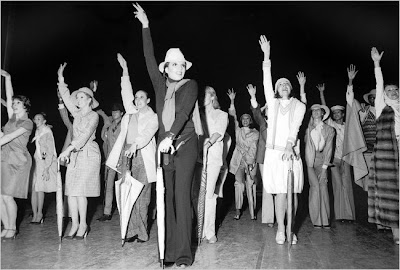 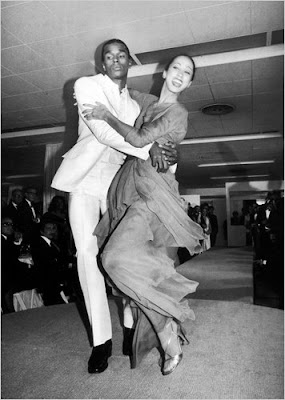 Among the African-American models on the runway at Versailles in 1973 were Pat Cleveland (with Sterling St. Jacques in a 1977 show).
Here is an excerpt from the article: Naturally the models and designers remember things in their own way, recalling mainly the mishaps (all the sets had to be scrapped because the designer Joe Eula had made measurements in inches and not centimeters), the flaming egos and a pointed absence of hospitality on the part of the French. “The French had started to snub us before we even got there,” Ms. Hardison said. “They laughed and said, ‘These are not designers, these are sportswear people.’ We were going into French territory unwelcome and so, of course, when we got there, the Americans all decided to fight.” 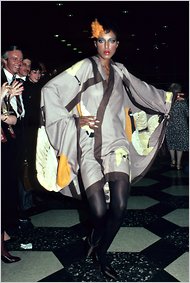 The American show was “bound for disaster,” Mr. de la Renta said. “Yves Saint Laurent had converted a white Cadillac and he had Zizi Jeanmaire singing “Je Cherche un Millionaire,” and every French star was working on the French segments, and Cardin had some kind of Sputnik thing with models ready to take off into space. All we had was one tiny image of the Eiffel Tower hanging against a black curtain in the back.”

Yet it came off, Mr. Burrows said, “because the bare stage with no props made it look so modern.”

Posted by Experimental Fashion at 1:35 PM