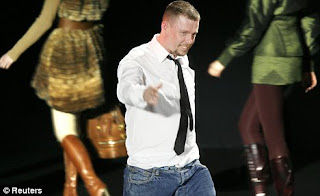 World renowned designer Alexander McQueen was found dead this morning in his London apartment. He was 40 years old. The British native, who broke into the London fashion scene in 1996, was known for his precise tailoring, imaginative and outrageous clothes and 13 years of fantastical runway shows. He was also a favorite among edgier, fashion-forward celebs—his designs were often seen on stars like Sarah Jessica Parker and Rihanna. McQueen was named British designer of the year four times throughout his career and will be remembered as an entertainer and a true style visionary
he lost his mother few weeks ago,
and
he commited suicide on feb.11, 2010
i can't believe it
T-T
rest in peace,
Alexander McQueen