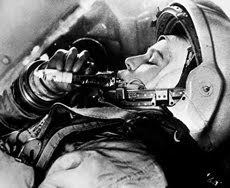 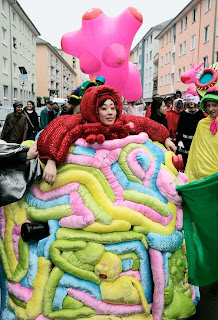 Check out the myriad performances featured at this year's Performa (happening this week!) There are videos of the performances streaming on the page!

Among some of the highlights:

CRAZY IMAGINED SOVIET FASHION SHOW OF THE FUTURE INSIDE A WOMAN'S SPACE SUIT!!!!
For Performa 09, Polish artist Christian Tomaszewski, in collaboration with video and performance artist Joanna Malinowska, considers how the future was imagined by the Communist regimes of the former Soviet Bloc. “Mother Earth Sister Moon” explores this theme by examining the fashion and style elements related to a diverse range of Eastern Bloc phenomena, including the Soviet space program, sci-fi film and literature of the era, and the cults surrounding the mysterious 1908 explosion over the Tunguska River Valley in central Siberia. This research will manifest itself as a giant reconstruction of the suit worn by the first woman in space—Russian astronaut Valentina Tereshkova—that also pays tribute to the sculpture “Hon-en Katedral” (“She-a Cathedral”), an enormous female figure conceived and built by Niki de Saint Phalle with Jean Tinguely in 1966. Visitors to the sculpture will be able to walk inside it and—at designated “performance” times—view a fashion show, with music by Masami Tomihisa, featuring both reconstructions of actual garments and new designs that evoke the Soviet space program and science-fiction films. In this way, the live show will act as a curated design exhibition in motion.


Acclaimed musician and artist Arto Lindsay (pictured above) will design and organize a multidisciplinary procession, “SOMEWHERE I READ,” featuring over 50 dancers and performers. Serving as Performa 09’s opening event, Lindsay’s procession will proceed down a major street in Manhattan on the same day as the New York Marathon (November 1). A central element of the piece will be the use of cell phones as musical instruments in a sort of pared-down marching band. All the participants will carry cell phones playing music specially composed by Lindsay. An inventive adaptation of the standard parade format, Arto Lindsay’s Performa Commission will create an oddly intimate public spectacle across New York City’s main streets.